Your Brain and Your Job


Working with a Lazy Brain

The brain is such a powerful organ, and many times I do not believe that humans are capable of comprehending just how powerful it is. The best part of it is that it is also lazy. Yes it is true your brain is lazy-why is your brain lazy? Its lazy because how often do you think about the actions that your brain is taking 24/7.  The laziness can be found in the love of patterns. You brain cheats you every single day! It answers many of your questions without you even thinking about the answer. That’s why there is a saying “your mind is already made.” You brain has a preferences for simplicity in function-especially being it that while you are thinking it is also coordinating your muscles that move and pump blood throughout your body, breathing for you, telling your heart how to beat, and perceiving the world around you with your eyes. (AMAZING right?!)


Now the question is why does your brain love patterns so much??? You brain is stuck in a more primitive time; therefore it is always reserved for flight or fight. How does have an impact in business? Well I wrote an post about something similar about a month ago ("Race in the Workplace-July 11, 2013). This post was a discussion on race and unconscious bias. There are some ways that you may be missing out on the best talent and people within your organization with the power of impression. There are several ways that our brain unconsciously makes decisions for us, and until you are conscious or aware about what is going on you may be allowing your brain to make decisions that you are unconsciously aware of.


Halo Effect: A cognitive bias in which a person’s judgment is clouded by a positive trait of a person; not allowing them to make an accurate assessment of the person because of this positive trait. For example, a male comes into an interview wearing a suit that is from your favorite store. You automatically think that he is nice and smart. Why is that? Because you consider yourself to be nice and smart and that is your favorite store and you have a suit just like the one the gentlemen is wearing. 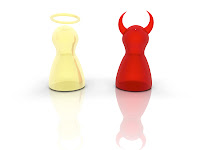 Horn Effect: This is a cognitive bias in which a person’s judgment is clouded by a negative trait of a person. The exact opposite of the Halo Effect. When you are so focused on a perceived negative trait you are able to make an accurate assessment of the person. An example of this would be you are running  a meeting and have been asked to invite a new member that you have never met before, however, this new team member has a large tattoo. You “hate” tattoos. Now you have ignored that new teammate and not taking into account their new and possibility accurate assessments of the situation you are attempting to solve for because you are so distracted by the tattoo.

Beauty Bias: The psychological idea that physical attractiveness correlates with intelligence and capability. We as people, with a strong primitive history, tend to believe attractive people are more capable people.  An example of this is being a recruiter at a career fair and an attractive young lady is interested in my company. She is earning her Masters degree in Finance and that is her optimal career choice-she is also a bit of an introvert. However you, as a recruiter make the assessment that she would be perfect for marketing and sales; ignoring all her credentials and personal traits because you are so focused on her physical traits. She wants nothing to do with marketing and may not be good fit in marketing. Can you see that???


Similar to Me: Our natural tendencies to be drawn to people who are “like me.” For example me and my social friends have a superficially diverse appearance but we all have similar perspectives on life. They may have different ethnicity's but we all see the world similarly and gravitate towards each other because of that.


Micro-Inequities: The unconscious formation of small judgments usually resulting in an inaccurate assessments of situations or events and are unrecognized by the perpetrator. Usually creating an unequal environment for a person or group of people. This is usually taking something that is small and creating an inequity because of it.


Micro-Affirmations: This is the opposite of micro-inequities; affirmations are subtle or apparently small acknowledgements of a person's value and accomplishments.

This post was meant to be an extension of my “Race in the Workplace” post from July 11, 2013. This is true diversity and inclusion and the meaning of intentional career development, intentional recruiting, and other intentional employment practices.  Many people may say, “Well, I would never do that. I would never make an assumption about someone’s qualifications based on their appearance.” However, in all honesty we do it because it is in our very nature to have biases. And to have our biases created and enforced by our brain unconsciously.

So the next time you are walking around the mall do not make a single judgment about a single person’s capabilities while out shopping. Avoid making assuming because of their race, clothing choices, tattoos, piercings, ect. But so long as you are aware of those behaviors you are capable of asserting some control over them to ensure that you make decisions based solely on qualifications and capabilities and not preferences.

Be a part of a team. Lead with integrity. Remain committed to your core values.

Posted by Duvet to Desk by the Professional Gal at 11:07 AM